I have no intro for this one. It’s just the perfect spring salad. And also, I’m officially obsessed with working with burrata and so expect a billion burrata-including recipes coming at you! Anyway, this salad just says spring. It’s light and fresh and bright and springy and perfect and here you go. 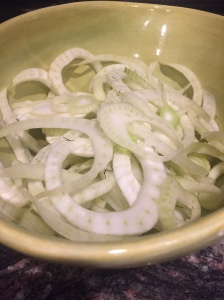 WHAT TO DO
Add the tomatoes to a pan over medium heat with about a tablespoon or two of olive oil and cook them until they soften and burst. Remove from heat.

Cut the bottom nubby part off of the fennel and slice the bulb into thin rings. Save a few of the fronds and chop them up for later. Add the sliced fennel to a large bowl and squeeze a whole lemon over the bowl. Sprinkle a healthy pinch of sea salt over that and then add the tomatoes straight out of the pan, oil included, then toss to combine, gently so you don’t squish the tomatoes. Before serving, cut or rip the burrata into small pieces and add it to the salad bowl. Mix carefully, top with those chopped fennel fronds, and serve. 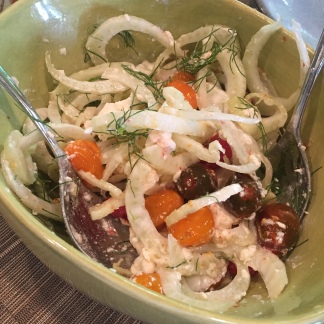 Watch out that your eyes don’t roll all the way back in your head – this is that good. Happy spring!