Maybe it doesn’t actually matter, but I couldn’t decide if I’d made a white pizza or a flatbread, and I rewrote the title of this post 6 times to that effect. Anyone? Read on and let me know in the end if I came to the right or wrong conclusion, would you? But I digress.

I’ve been making a lot of soups lately, as you know, but I was ready for something else on a Monday this week. If you Google or search on social media for the hashtag “MeatlessMonday” you get a lot of the same thing: soups, veggie bowls, quesadillas, hashes. I’ve done all those. I was trying to think of something I could pull together quickly that would also satisfy every customer at my table, and this little platter of veggie deliciousness is the end result. It really is easy and fast – no more than 30 minutes total, including prep. It’s also completely versatile. Use whatever veggies you love or that your diners will eat! Maybe calling it a pizza instead of a flatbread is actually perfect – because who can argue with pizza? It’ll sell itself! Here you go.

WHAT YOU NEED
* premade pizza dough (or you can make your own, but then it will take longer than 30 minutes, so it’s up to you!) – Pillsbury Pizza Dough or a bagged dough (like Trader Joe’s) are perfect

WHAT TO DO
Preheat the oven to 425F. Spray a baking sheet with nonstick spray and roll the pizza dough out onto it. Bake 8 minutes (or according to dough packaging instructions for prebaking).

While that is in the oven, prepare your veggies and add them to a roasting pan or on a second baking sheet. Drizzle lightly with olive oil – just a tablespoon or two at the most – and sprinkle on salt and pepper to taste over all of the veggies. When the dough is done pre-baking, swap out the trays and roast the vegetables about 6 minutes.

While the veggies are roasting, spread the ricotta cheese over the dough, and then dot the cheese with minced garlic (as much or as little as you prefer). As soon as the veggies are done, spread them out across the dough. You will have extras, but who couldn’t use some already roasted vegetables? Add them to a salad or just warm them up for a side dish another night during the week!

Top the vegetables with some Parmesan (about 1/8 of a cup or so should do), and then some mozzarella (same amount, 1/8 of a cup), then sprinkle the chopped basil on top. 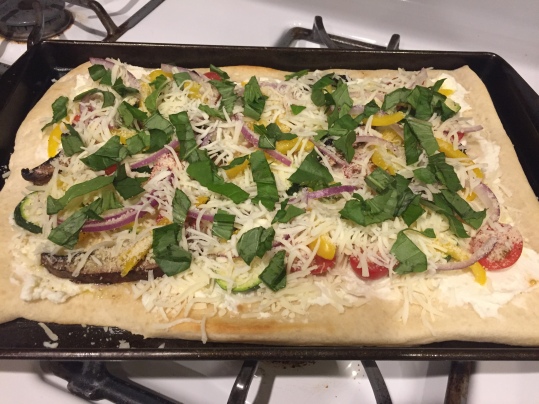 Cook for 8 minutes, cut into squares, and serve. And there you go.

(So… what say you? Pizza or Flatbread?) 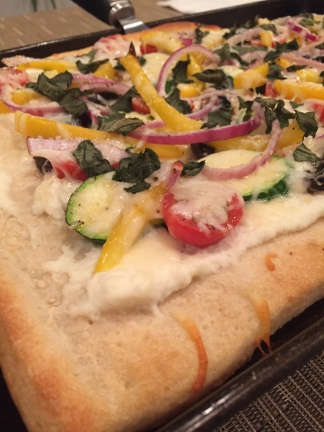