This is a great example of branching out, but staying realistic, and also of don’t judge a book by its cover (ahem, HUSBAND!).

I don’t like to make the same thing all the time. Sure, we have some solid Go-Tos in our repertoire, but I really like to try new recipes every week. I find I do this even more now that the kiddo is eating with us most nights, because keeping it interesting/surprising and playing off of ingredients that I know will work for her palate/temperament makes that the logical cooking move. So when I saw this recipe floating around somewhere, I had to pin it and try it. It looked (to me) a little different in a good way, but also fast and reasonable for a weeknight. But when I told my husband about the menu, he scoffed, rolled his eyes, and made little boy “ew” faces and promptly told me not to get upset if he doesn’t like it. BUT THEN. I was still in the kitchen when he took a bite, and I am not kidding when I say that the first words out of his mouth were an exclamatory “this is good!” So, all that to lead into the following: do not judge these ingredients. I promise you the outcome is a winner. Spoiler alert: pipsqueak ate two whole patties on her own. Anyway, here you go…

WHAT YOU NEED
* 2 5oz cans tuna
* 2t Dijon mustard
* 1 slice bread, torn into small pieces (original recipe calls for white bread, which I just don’t have on hand generally; I used whole grain sandwich bread)
* 1t lemon zest (zest of about 1/4 a lemon)* 1T fresh lemon juice (about 1/2 a lemon)
* 1T water, or use 1T water from the canned tuna + 1t olive oil (that’s what I did)
* 2T fresh parsley, chopped
* 2T fresh chives (or green onions or shallots), chopped
* salt + pepper* 1 egg
* 2T olive oil
* 1/2t butter
** the original recipe also includes some hot sauce, but since I knew I was feeding my daughter, I just left that on the side for those who wanted

WHAT TO DO
Prepare a medium-sized bowl on the side. Drain the tuna, and if using tuna packed in water, don’t forget to salvage a tablespoon of that water, and add a teaspoon of olive oil, pouring both directly into the prepared bowl. Add the tuna, mustard, torn bread, lemon zest and juice, parsley, and chives. Season with salt and pepper, to taste (I started with 1/4t each of salt and lemon pepper, and then tasted the mixture to make sure the seasonings were balanced. This amount worked for me, but you may need more or less, so proceed with caution.). 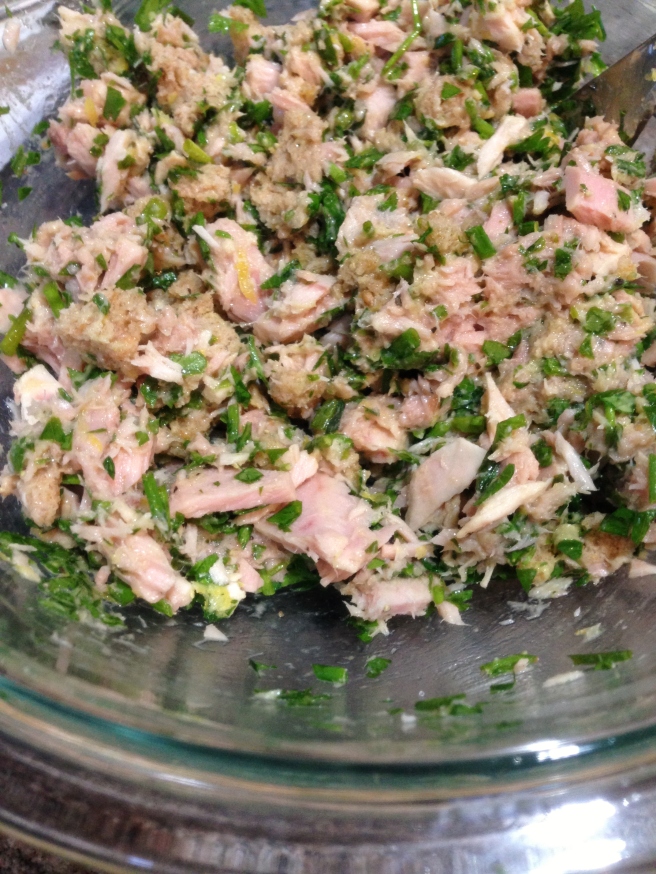 Add the egg, and mix together with a fork to blend completely into the mixture.

Use your hand to ball the mixture up in the middle of the bowl, then divide in half twice to get four approximately even clumps. Form each clump into a patty. Now, the original recipe recommends placing your patties on a wax paper-lined tray to chill in the fridge for an hour. I didn’t have time for this, and it also says you can skip this step, but explains that chilling helps the patties stay together when you cook them. I can see how it would help, but I was very careful with my patties and we had no falling apart problems, just FYI.

Heat the olive oil and a small amount of butter (I probably did 1/2 a tablespoon) over medium to medium-high heat, and carefully place the patties in the pan. Cook about 3-4 minutes per side, until browned. Given the threat of falling apart, I used a two-spatula approach for flipping, which worked great. Just don’t get hasty with it, or it will likely break apart or flake. You know how fish can be flaky (Did I just make a fish joke? Terrible.). 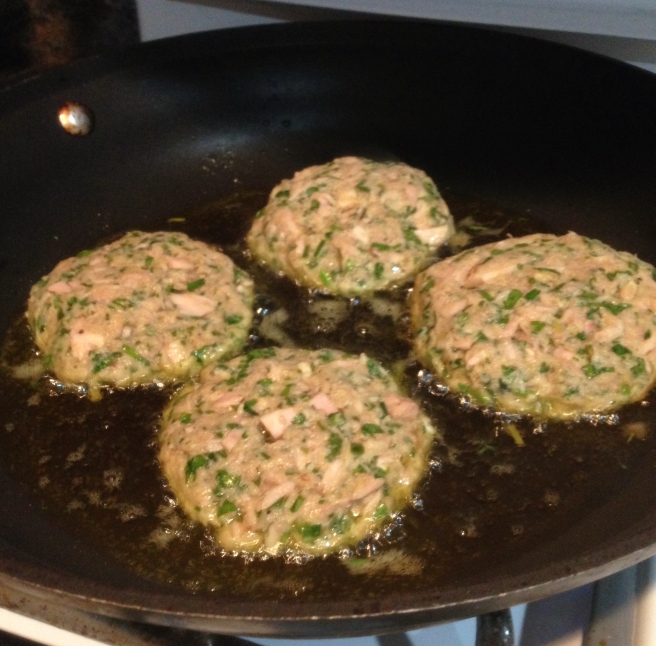 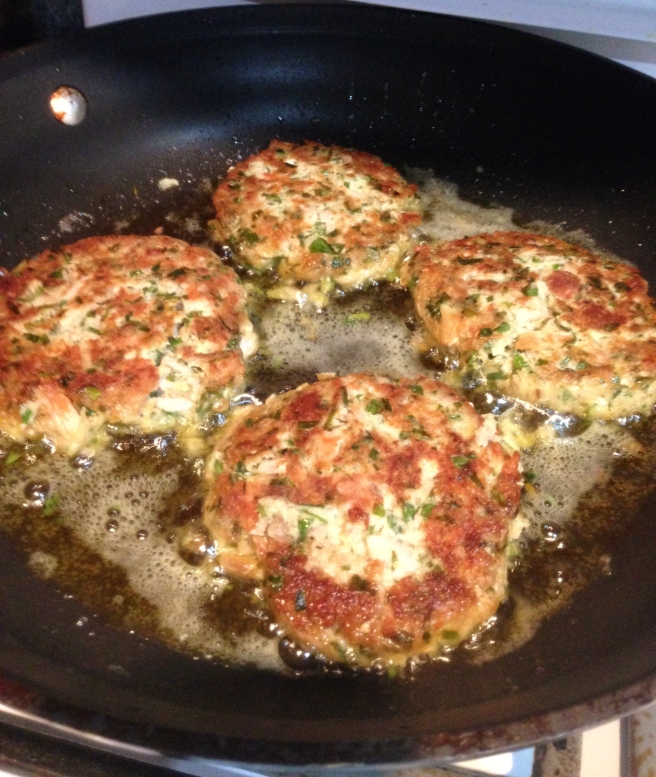 I served these over a bed of baby spinach salad with crumbled feta, tossed with a little olive oil and some more fresh lemon juice. I also sauteed some asparagus in olive oil with a little salt and lemon pepper, but I didn’t photograph it, so just use your imagination. 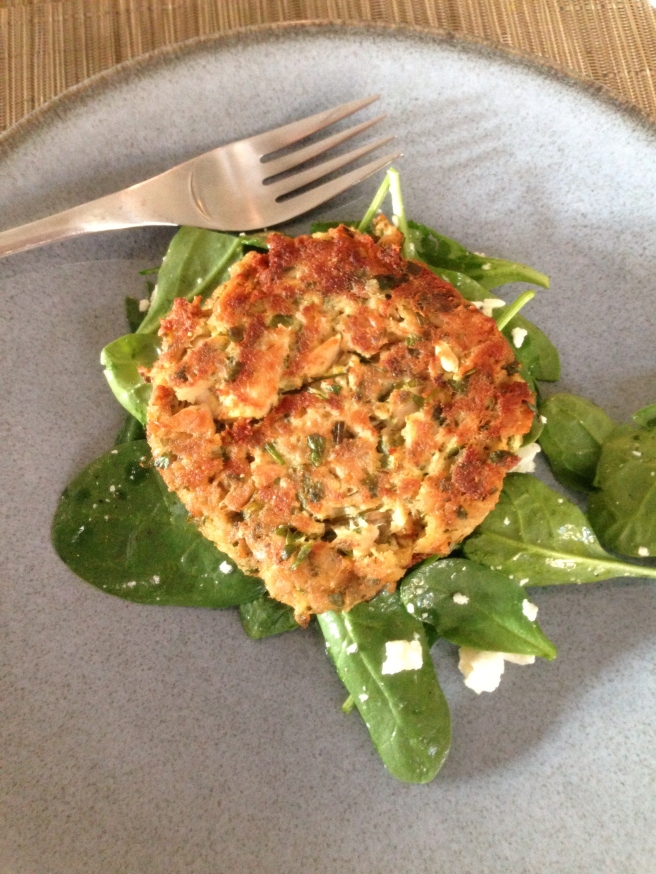 I know you may want to join Mr. Skeptical and judge this recipe for the canned tuna. But give it a shot. Open your mind, man! There’s something pretty great about the right balance of seasonings, and especially lemon zest, for some reason, that can really elevate even the most boring-seeming ingredient to a whole ‘nother level. You know what I mean? Give it a shot and see for yourself. And then let me know what you think!

(Again, the original recipe. And here’s my pin.)